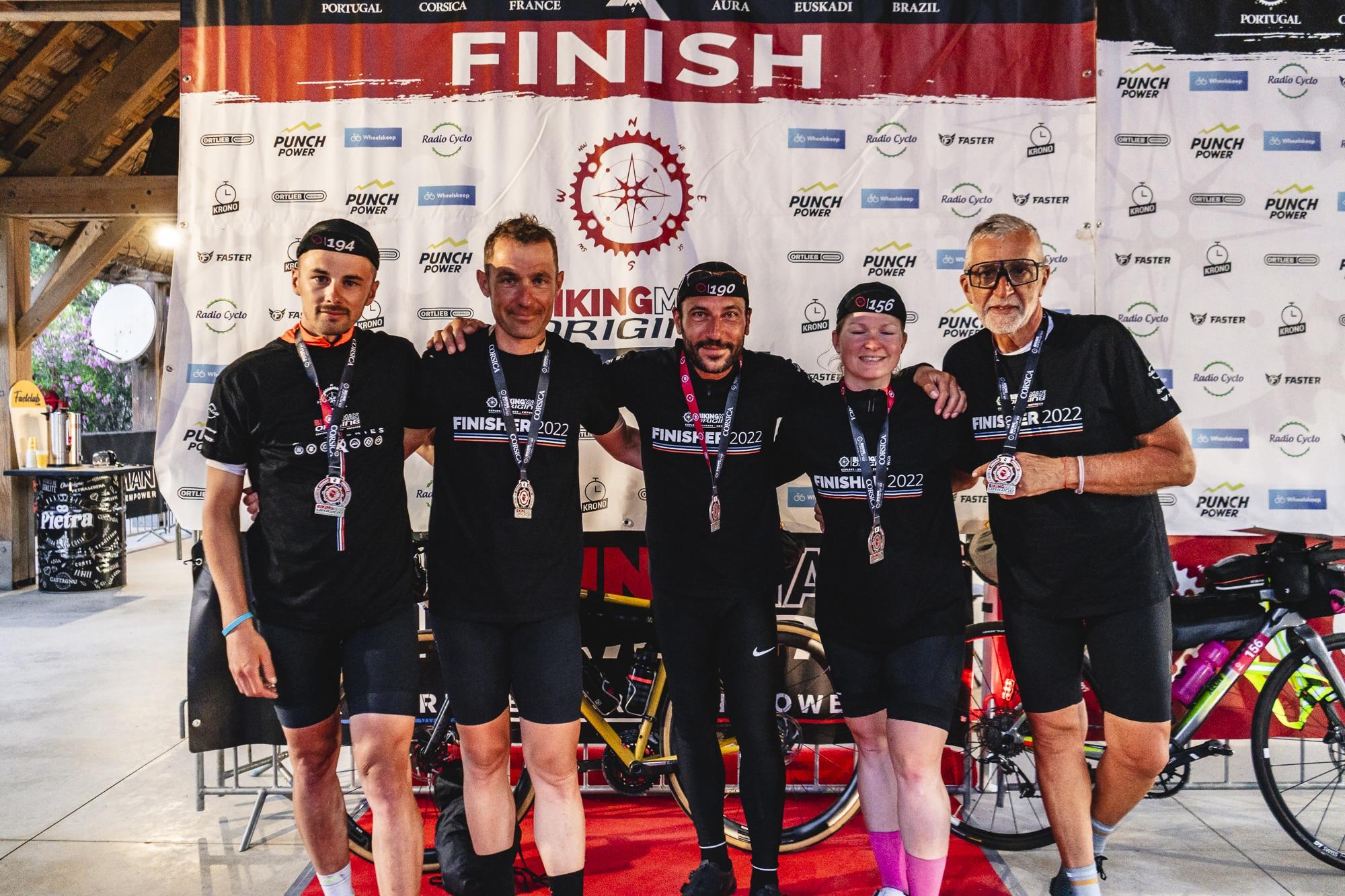 The multiple Corsican experiences of the FastClub

A BikingMan, as any ultra race, can be approached in many ways, every one joining to find something different. Between pure competitors and cyclists eager for wide open spaces, there is not just a single good way to live your BikingMan.

This is the observation made by Max, captain of the FastClub, who gathered his troops en masse (11 members from various backgrounds) to meet and share a moment on the 2022 Corsican stage. Stories of their various fortunes on the island of Beauty.

Signing up for a BikingMan is never trivial. At first, we are all excited, then we train, then we can’t wait, we feel we are ready and then comes the stress of having to race!

To get around this stress and motivate ourselves up to and during the event, we all signed up for the same race. Indeed Fastclub is a solo club that has no local base, so for us, it was an opportunity to enjoy and ride together!

We found ourselves on the BikingMan Corsica check-in at no less than 11! That’s more than a full wave at the start! It is true that registering for an ultra race, managing the logistics and racing alone can be scary and stressful. For once, we were not the most stressed of the participants. With our complementary experiences, everyone had been able to find advice before the race. Our two Corsican members (Jean-Marc and Pierrot) also gave us some advice on the route.

We were therefore ready to battle, not all in the same way, but all in a good mood! For fun, and it’s a lot of fun in the paddock! Arrived at the start, the smiles were still there but the apprehension of doing the 1000 km was discreetly felt…

Here are the cyclists behind the club and their BikingMan Corsica!

– Maxime Prieur (Captain Max): already a BikingMan Euskadi finisher in 2021 and president of the club (and your journalist today!). For me, the goal of this BikingMan was to do it full gas, race first. To achieve this goal, I started very light on the bike, leaving aside comfort and emergency solutions during the race! The results are very positive with a good fourth place and a time of 48h41 to complete the 960 km race course. Yippee! 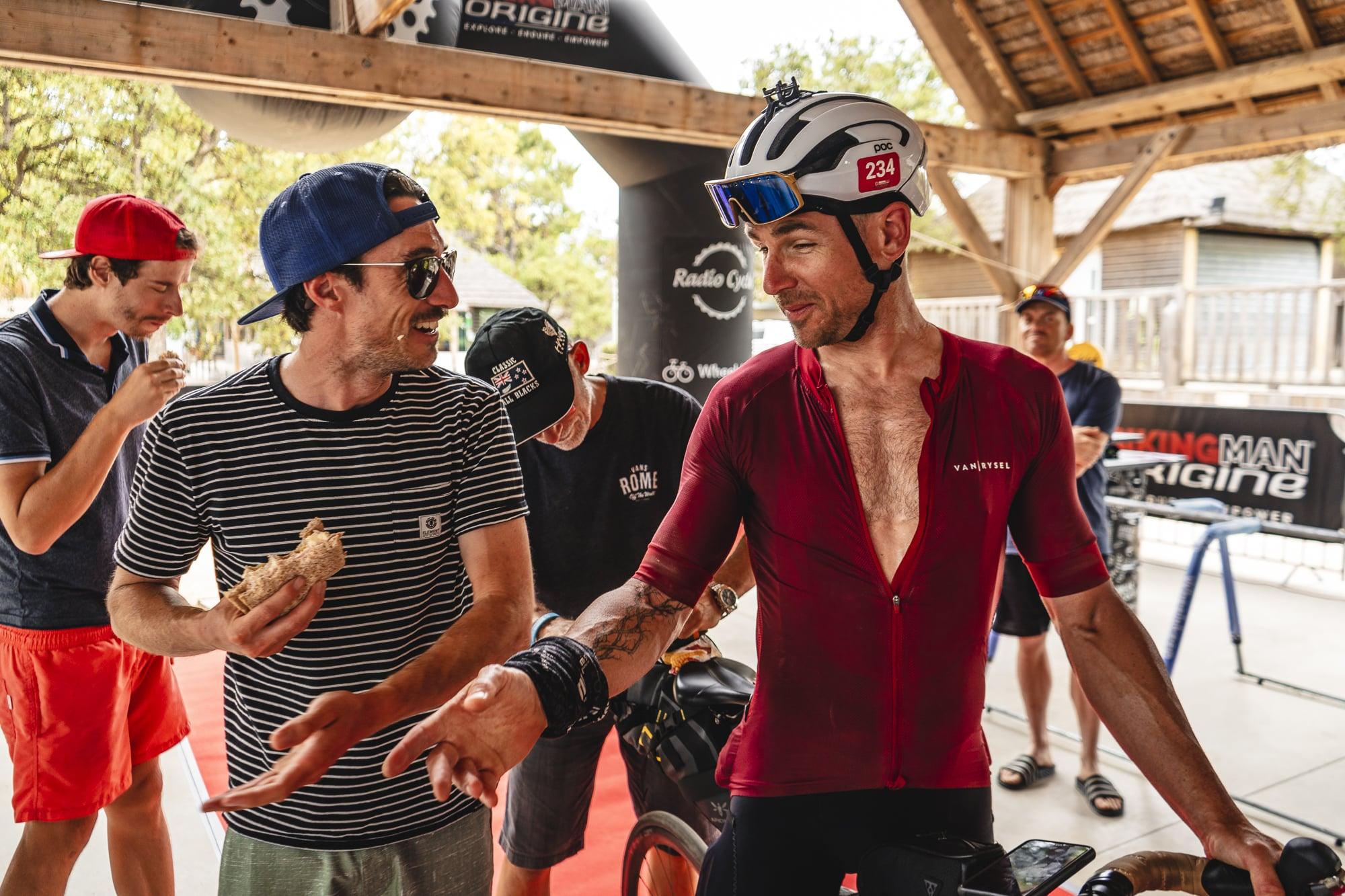 Fabien welcomed as it should be by Captain Max

– Fabien Morel: For Fabien, it was a great first time. Amateur cyclist and used to long rides (several times 400 and 500 km solo) as well as with a long experience of family cycling holidays when he was a child, Fabien at the start announced loud and clear that he wanted to ride only by day to enjoy landscapes and ended up doing a first day in management at a decent pace and following on with a good end of race which allowed him to grab a good place in the top 10. His anecdote: just before Calvi, the cucumber he had on his bike fell… 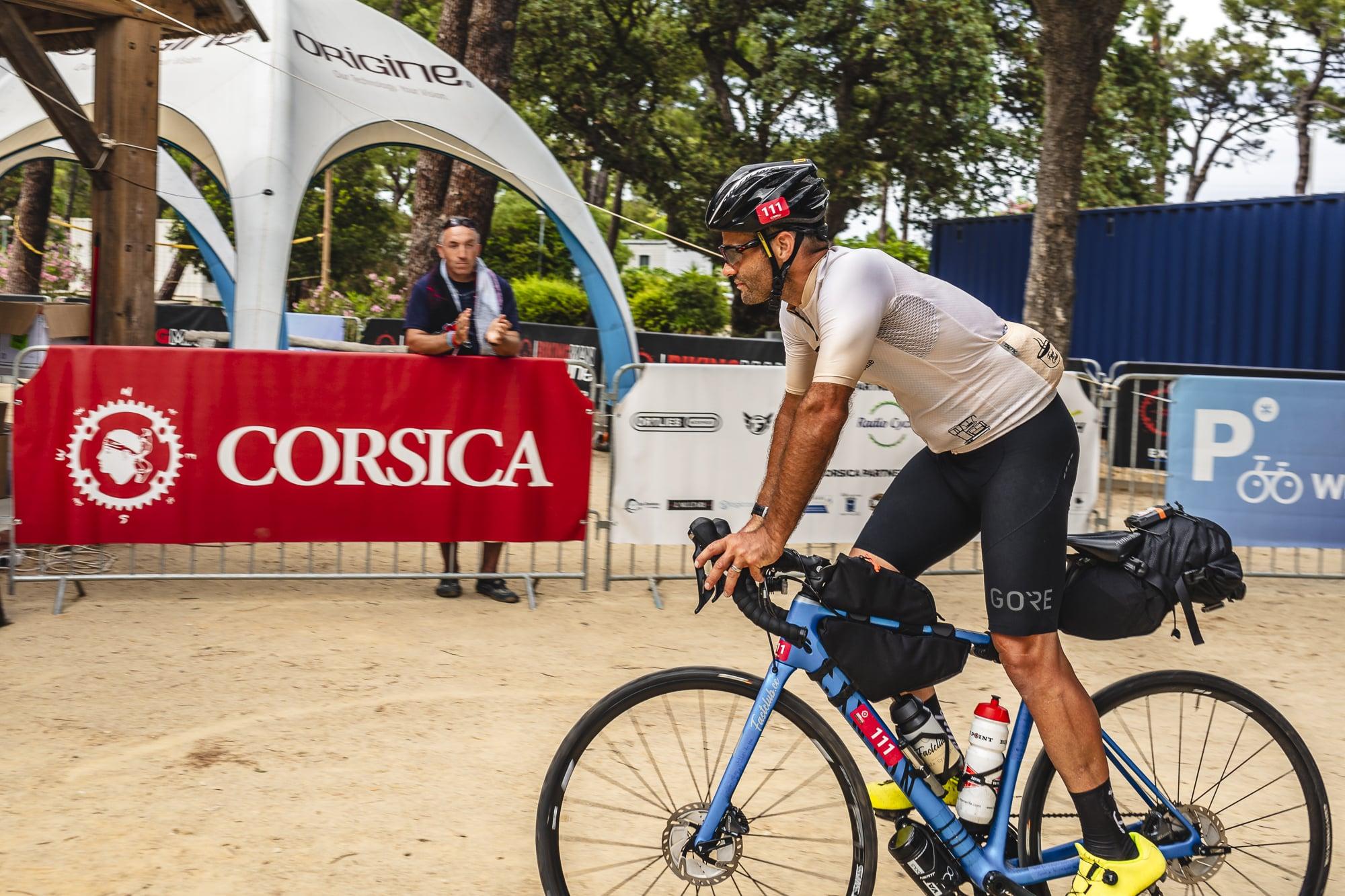 Mathieu, the quiet force at the arrival of the BMC 2022

– Mathieu Andrieu: If you are told “quiet strength”, you can now think of him directly! Start, finish, regularity, he who rides a bike, swims, runs, covered the race without the slightest problem! He ends up with a good place in the top 20 and thus makes his two children very proud of their dad! Passing the finish, the first thing he said “Fabien, I found your cucumber”. 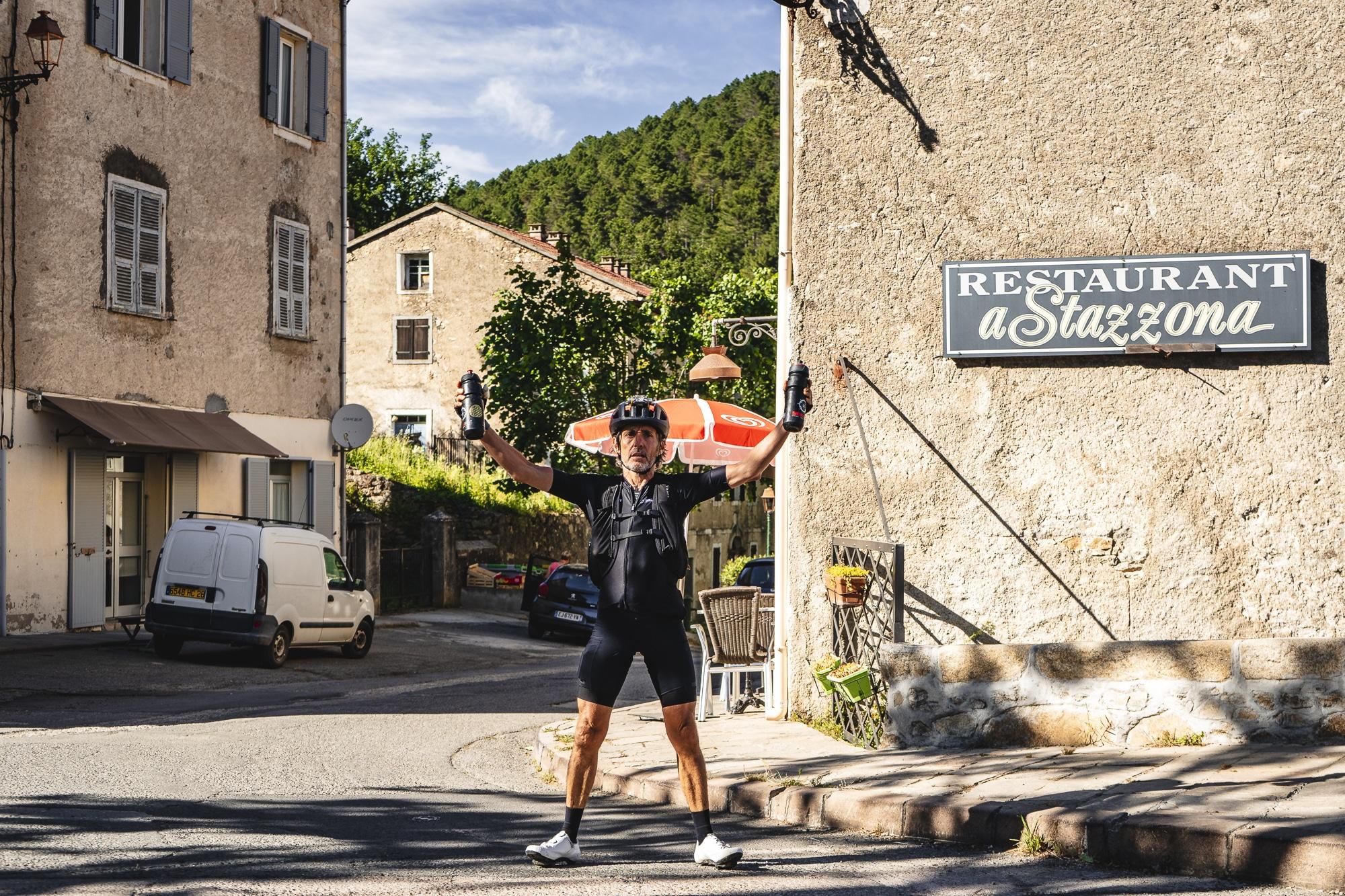 – George Camprubi, aka Le Bananier: So there, big story! Le Bananier only feeds on fruit, so at the start, he was rather loaded. Excited like a flea but accustomed to the effort (he had already finished the BikingMan Euskadi 2021), George gave us a very good first day in the top 20. During the second day, he suffered from heat stroke. Left as in 40, he let a few competitors pass with a double puncture and running out of Banana! He ends up with a nice place in the Top 30! 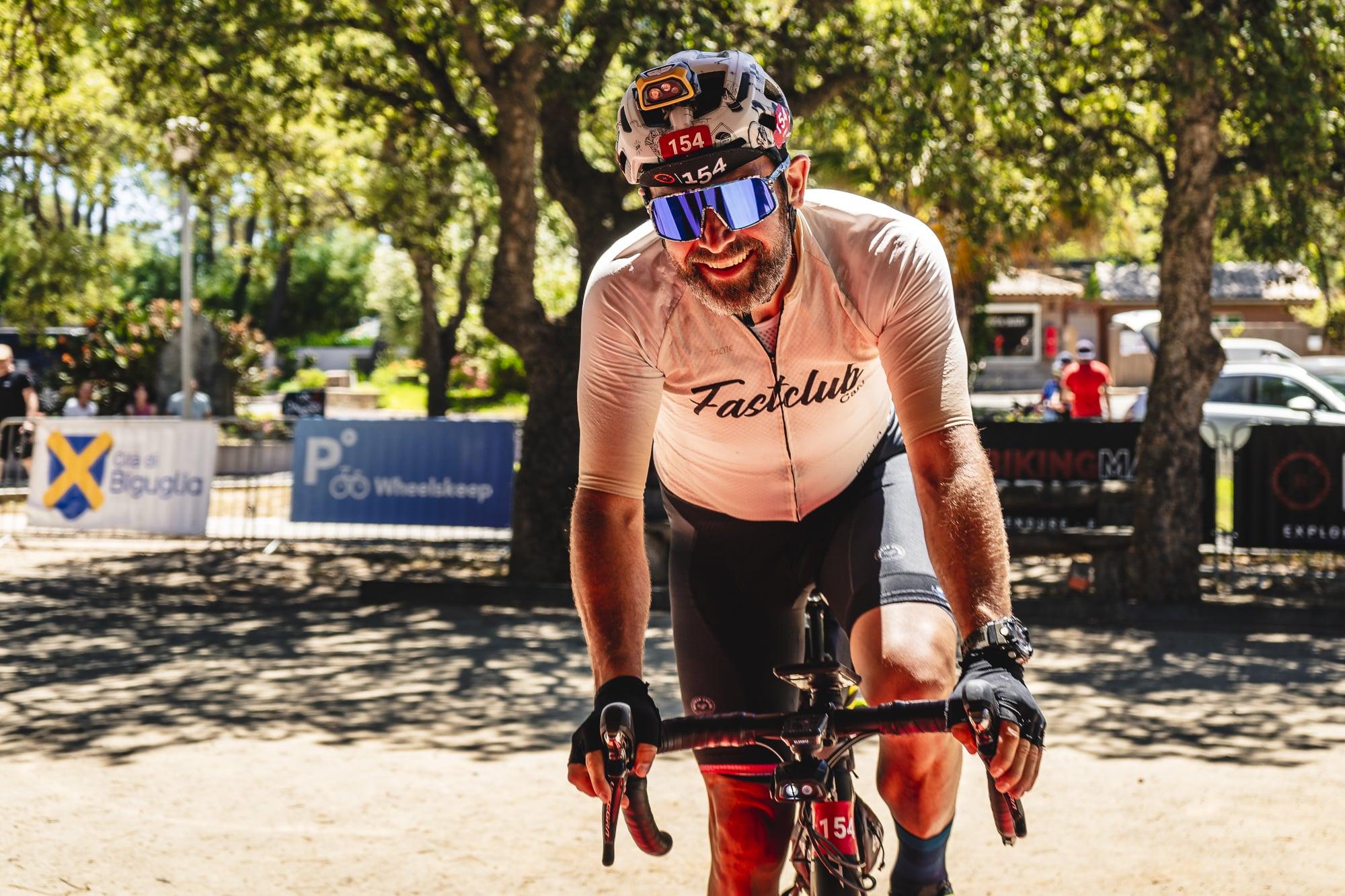 – Thomas Delaplace aka Thomas of the place: There, we found a hell of a client! Thomas is a very regular cyclist, we even saw him this year on FFC races, and last year on another BikingMan too. But with all his experience and management, we will remember one thing: He almost gave up after colliding with a bumblebee that hit him in the groin…(hahahahaha). He finished in great shape after a steady-paced race. 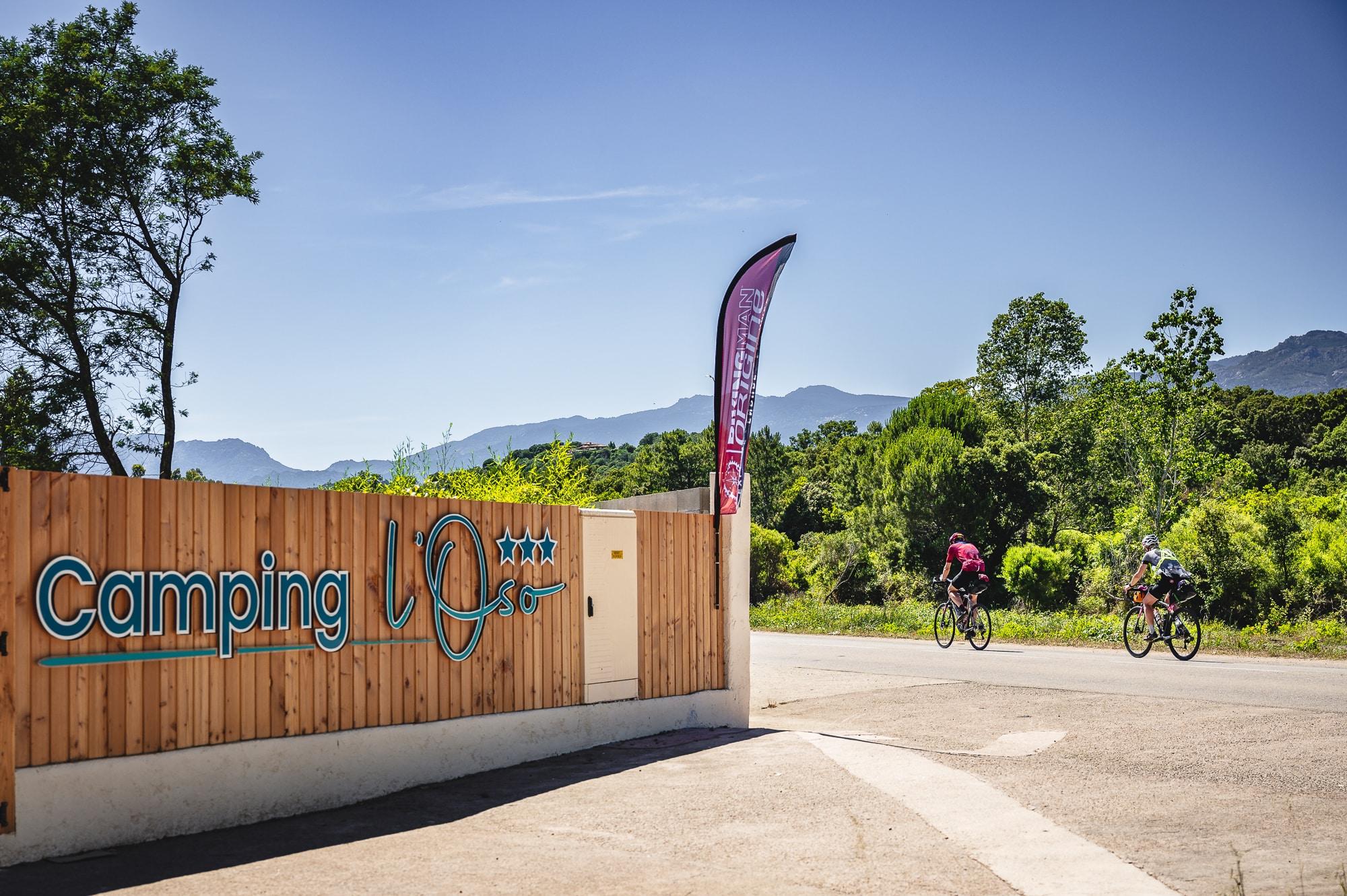 Caroline and Thierry departing from CP1 – heading for the west side of the island.

– Thierry and Caroline: Our couple from the Avignon region, two enthusiasts of effort, with many years of Triathlon behind them. For them, it was almost revenge. Last year, they had finished the BikingMan France after a night in the hospital for Caro who had eaten a not-so-fresh pie in the middle of the race… Our two ex-triathletes managed their race from start to finish, but a BikingMan is not trivial! They arrived at mealtime as if the call of the plate had pushed them! Their faces drawn, they more than passed their test!

– The DREAMTEAM: Jean Marc / Pierrot / Richard: If you want a good atmosphere and mutual aid, it is with them that you should ride. How a solo race can become a team race. A team is not necessarily there to go faster by taking over as in the Tour de France, the goal of the friends: to ride together to help everyone in moments of weakness. Pierrot had to take a lot of micro-naps, Jean-Marc had to push his bike, Richard had to put up with them. Stories during the race, they have thousands of them (on your own, we generate a lot less!! On the one hand, I am jealous of their friendliness during the race). We’re going to ask them to do a podcast to tell everything! An anecdote about their race: Richard is going to pay the bill in a restaurant. He is told that the card is only accepted from 50 euros. Pierrot then gets up and raises his voice with his (Corsican) accent! Suddenly, the payment ceiling is greatly reduced (the Corsican charms…). 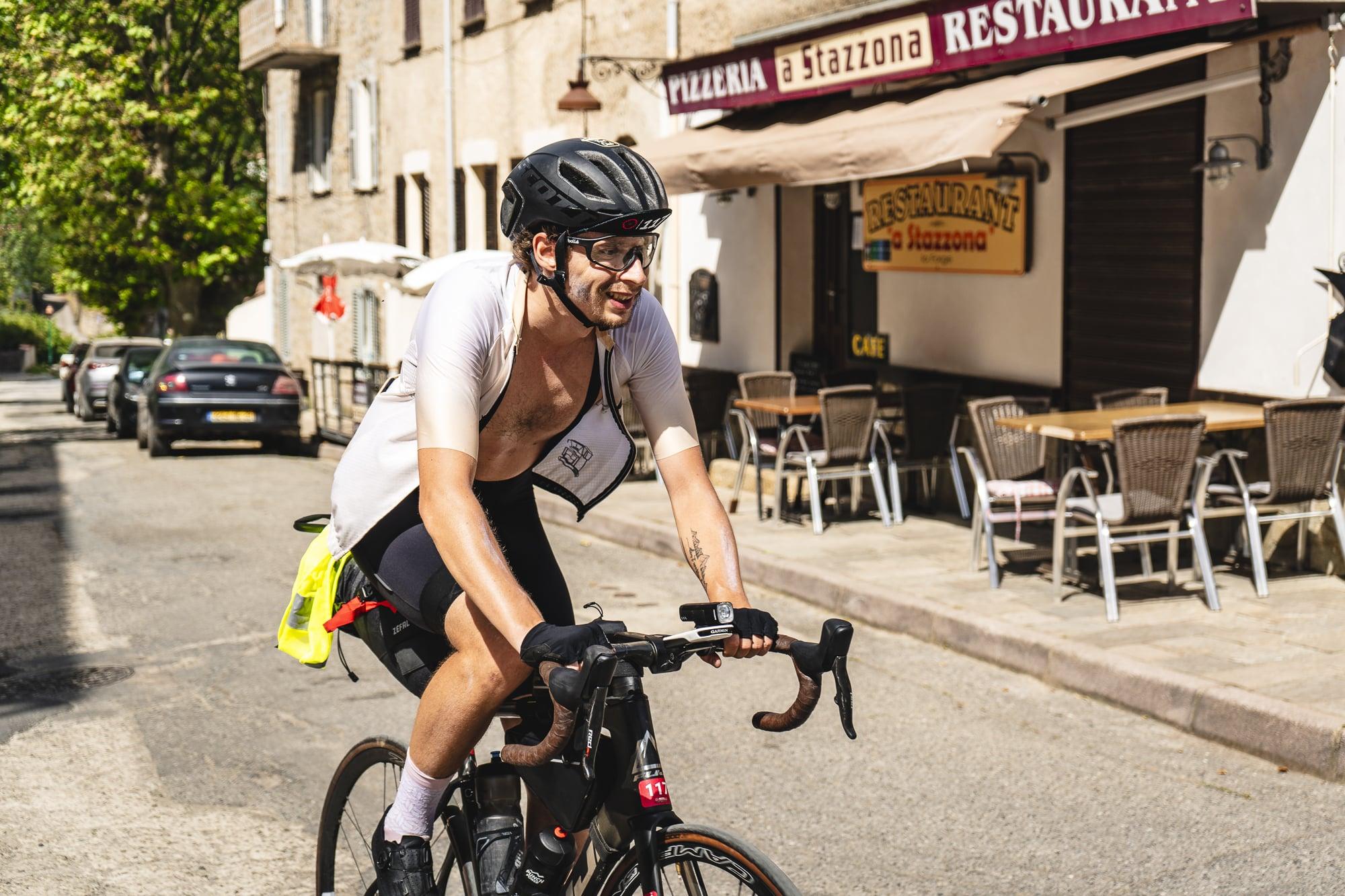 Clément, jinx of the FastClub on the BMC2022

– Clément Bancons alias Repsol (temporary nickname for his regular stops at service stations): Here, this is what’s called bad luck! A very consistent and trained cyclist, he came on his first Ultra, largely prepared. He was betrayed by his material. The first day on a downhill, coming out of a bend, he rolled over a stone at high speed and tore his inner tube (damaging the tire in the process). He repairs and continues his day with Fabien (by the way, they laughed a lot while riding side by side). After a short night at Cp1, he sets off again, and 1km after the CP, he rolls in a road repair (me too but I had stronger tires) and punctures a second time. He therefore lets Fabien go at that time. He leaves without any problem but with no more spare tube! Then he loses his credit card and his money by grabbing a bar in his back pocket (the next day, Thierry and Caroline will find it hahaha). He then catches back to Fabien and there is the tragedy, the tightening screw of his derailleur is gone. It’s 5 a.m., he gives up for a mechanical problem… The story to remember is that finally, while hitchhiking, he went to a bike shop that repaired his bike. He could have resumed the race a few hours later. A great lesson learned for the whole club!

As you will have understood, the 11 of us all followed the same route, we were at the same start and at the same finish, but a BikingMan can be approached in a lot of different ways with a lot of fun each time!

You can find the full race standings here:

Image nerd
The eye of the BikingMan team, David is that guy stuck behind his camera all day chasing cyclists on the road, enjoying the landscapes while doing so.

Other posts that you should not miss. 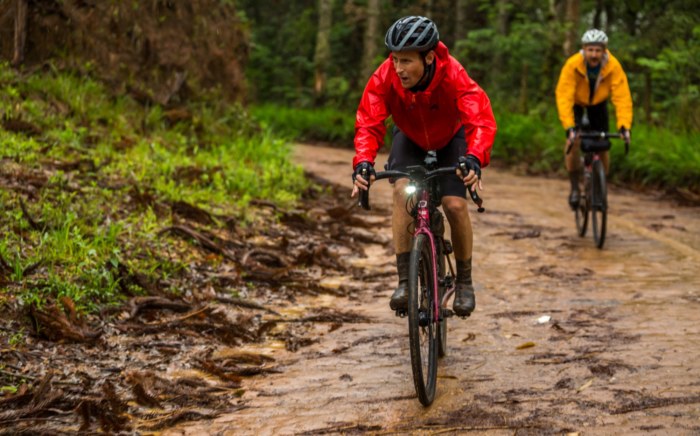 Inside BikingMan Brazil with Axel

Follow Axel and live his experience of the BikingMan Brazil from the inside, from check-in and the bike checks, to the … 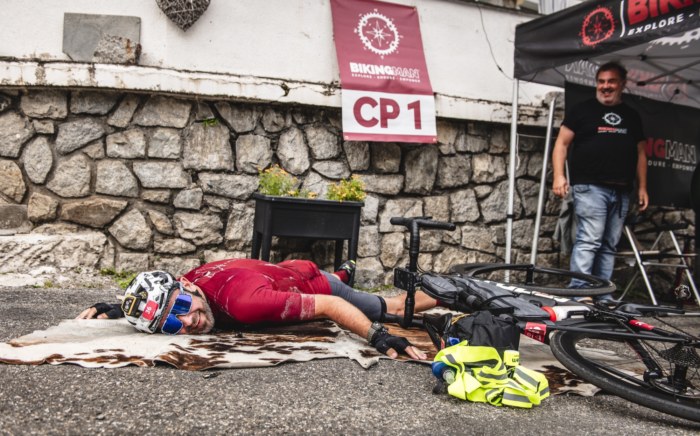 The start of my new life – Thomas Delaplace

A few weeks ago, Thomas Delaplace participated in his first BikingMan. And for a first, his choice fell on a choice … 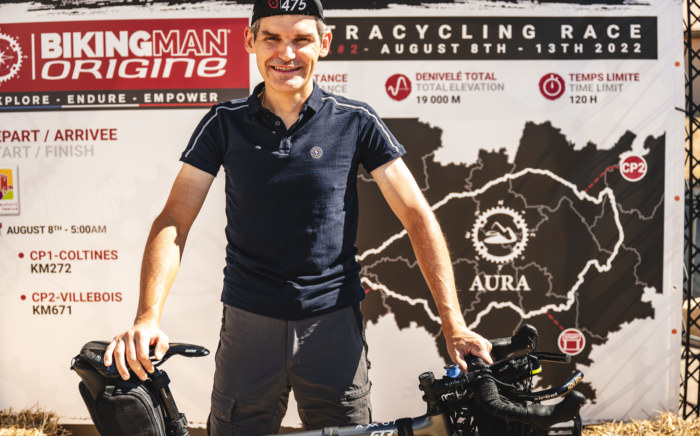 It is a somewhat singular story that we share with you since, fortunately something quite rare, it is one of an adventure … 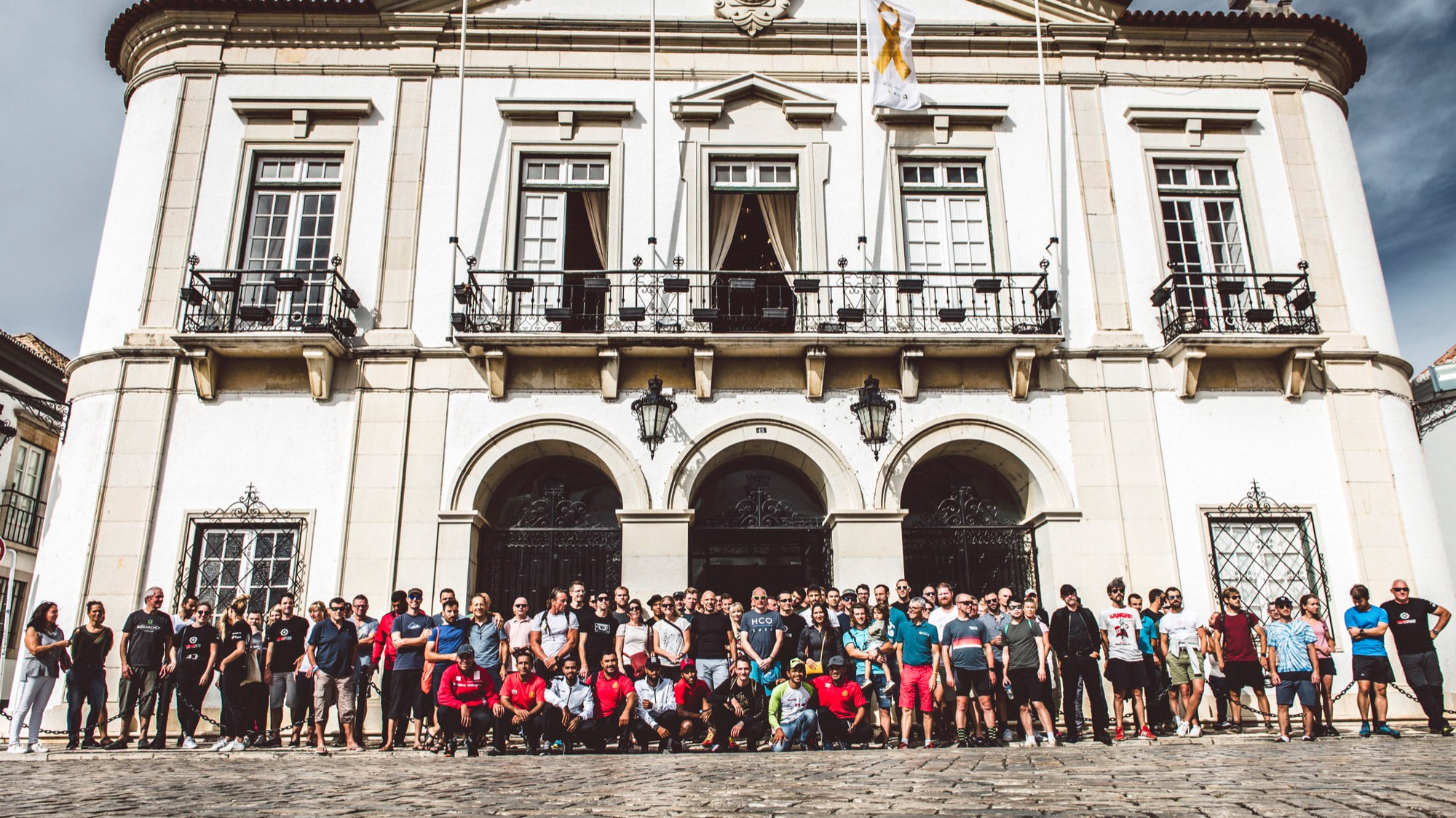 Improve your Hall of Fame profile by making the most out of it: 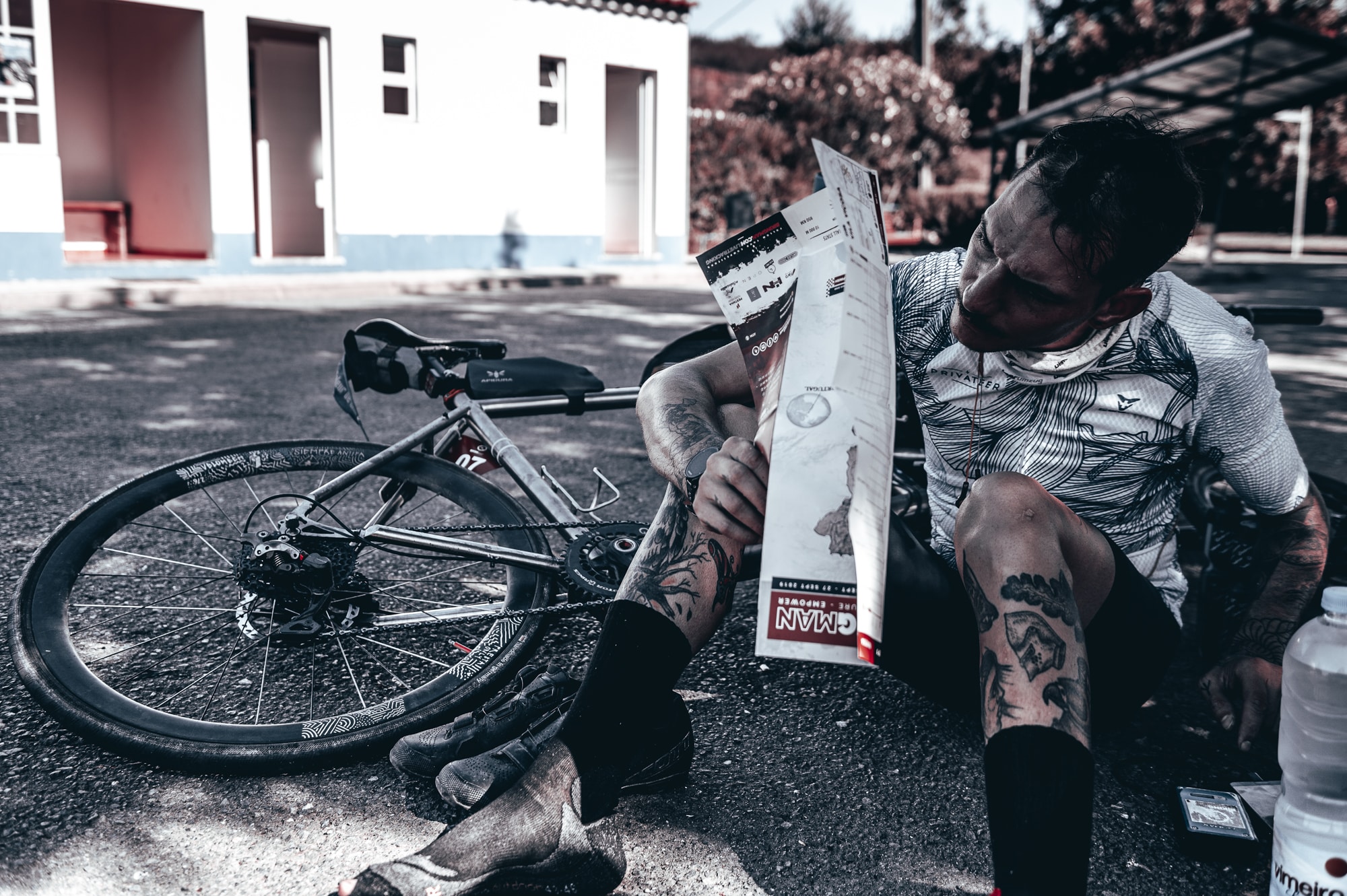 Join the BikingMan familySubscribe to our newsletter to receive all our updates on events and ultra bikepacking adventures.

is the Title partner of the BikingMan championship.
Sharing through the design of their bikes the same values of escape and adventure, Origine has teamed up with BikingMan to immerse you in these extraordinary ultracycling experiences.